She Lives. Don't Move. Don't Breathe. She Will Find You. 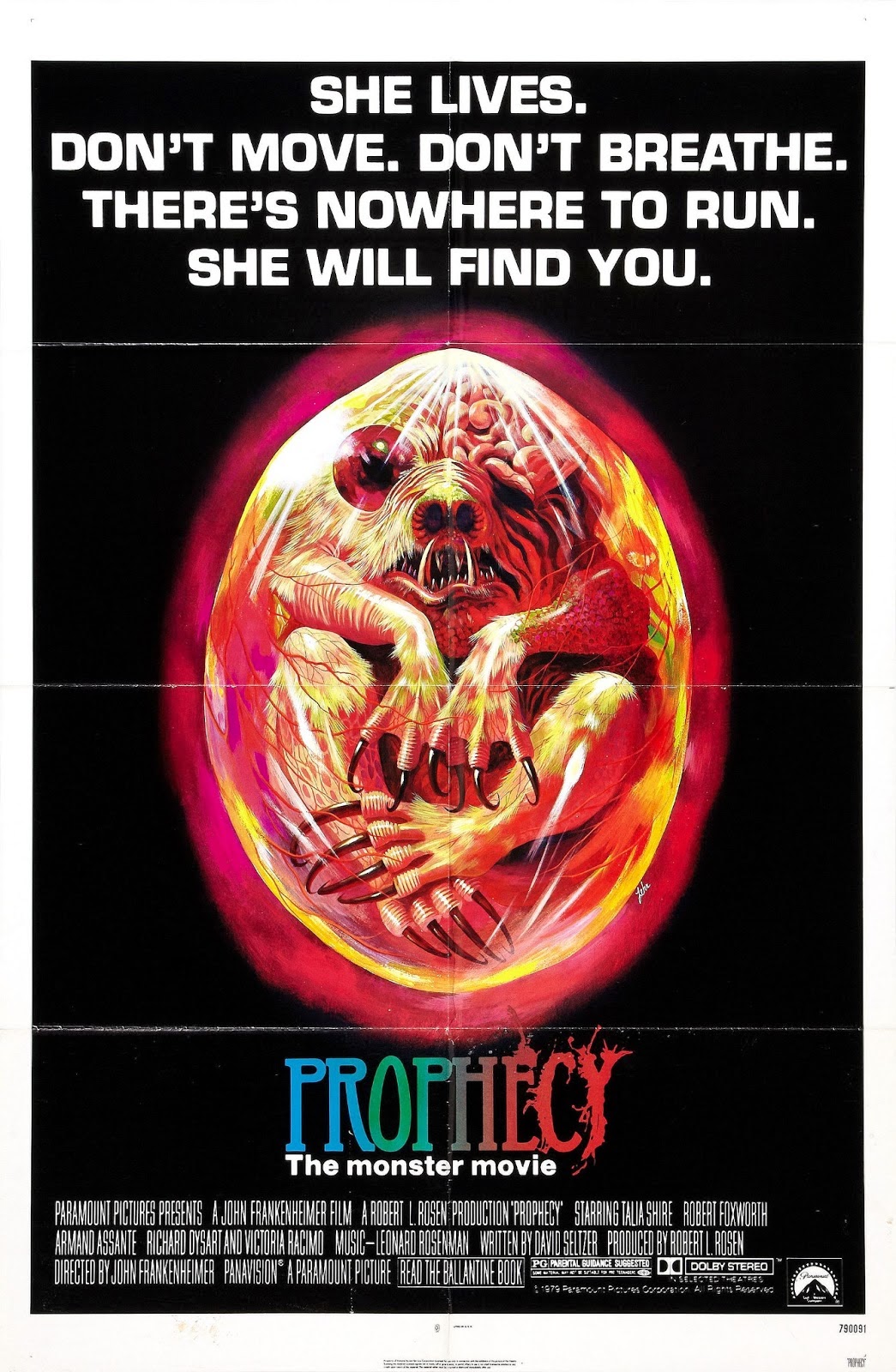 A Doctor (Robert Foxworth) and his wife (Talia Shire), at the request of a concerned friend, travel to Maine to research the impact that the lumber industry has on the environment. They find fish that grow many times their normal size, and also a series of bizarre and grisly murders. Veteran Director John Frankenheimer manages to present "Prophecy" as both a monster movie, and a suspenseful tale about the deadly forces which result from the pollution of the environment.

So as a Horror movie collector you sometimes see the cover art of something you have never heard of. Sometimes you get a sloppy piece of crap and sometimes you find a little gem. At first I had no clue what I was getting into with Prophecy it claims on the cover "The Monster Movie". It opens well with a few lumberjacks in hot pursuit of something. Then it flips to a grizzly New York slum. Hmm, all of a sudden I'm watching a political undertone filled movie. In fact, the understory of this movie don't mess with mother nature and correct me if I'm wrong but was that not what the 70's were about?

You get a group of Indians out to protect the land and a money hungry paper mill owner that does not realize he is polluting the area around him. This is where the movie starts to lose me a bit. It really wants to hammer home its message. But I can not complain it is handled well I just thought this was a monster movie. Is the wealthy guy the monster?

This movie does have a lot going for it, it is very beautiful to look at and takes full advantage of its scope. Director John Frankenheimer has made some big movies and his talent is on display here. Then the soundtrack is right on the mark, in fact, this is one soundtrack I would not mind owning. The score really fills the room and is very powerful when it needs to be.

The sound effects blew me away for a 1979 movie. They used the Dolby to hits maximum power. The monster breathing comes out of different speakers and that really draws you in and makes you sit up and take notice. And it was needed after that boring second act. I can not tell you enough the sound effects bring this movie to life and are worth it alone.

This movie is not going to blow too many people away it was PG for crying out loud but yet gives you good visual scares from the Bear like monster. In fact a young audience with jump out of their seats. The bear itself looks pretty good for a man in a rubber suit. I just hate that it took over an hour to get there.

In the end this movie got under my skin some how. At first I thought well that was ok. But I could not stop thinking about it and how it really was a good monster movie with a politictal tone.  The last 20 minutes will blow you away if you can make it that long.

Prophecy is not for everybody, but I'm glad I picked this one up.


As a bonus, I found one of the cool death scenes on you tube.