Time to warm the chestnuts by the fire grab some eggnog and fire up your favorite streaming service to check out one of the oddest and creepiest Christmas Specials of all time. The family is decorating their tree when Daddy notices the star his father made is missing. When Billy asks Mommy why this made Daddy sad, she tells him it's because the star was made by his father, their Granddad, who is in Heaven. Jeffy then has a vivid dream about Santa and asks him in the dream to bring Granddad home from Heaven for Christmas to make Daddy happy again. 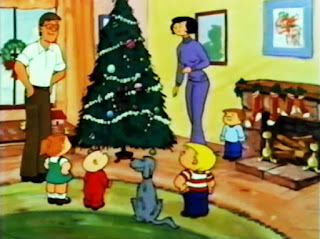 When Billy learns that Jeffy thinks this really will happen, he is afraid that Jeffy's Christmas will be ruined, since Santa can't do that. However, Jeffy doesn't understand, for when he is at a department store meeting Santa, he makes this same request. The store Santa, trying to dissuade Jeffy is in his own, says that greedy children get nothing, to which Jeffy replies he wants nothing else if his family is reunited with Granddad, making the store Santa shake his head, not sure of what else to say. Mommy tries to explain why it's not possible to Jeffy after Dolly tells her what Jeffy thinks, but he gets upset and doesn't want to hear it. That night, he gets a visit from Santa, who explains there are some things that cannot be asked for, but to show that he meant well, he reunites Jeffy with Granddad.

So watch the very strange A Family Circus Christmas from 1979 with a box of tissue and a little extra something in the eggnog because the seventies were very different. This special gave me nightmares as a child I just did not know what to think.

Make sure your following along with the other bloggers celebrating Creepmas by clicking HERE
Posted by Bob Johns on December 05, 2018
Christmas Creepmas 2018 Family Movie