Don't miss a bite of this tasty horror film! 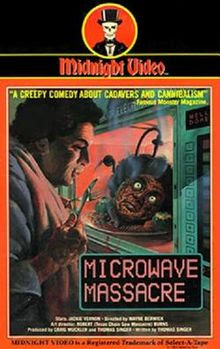 Construction worker Donald is having a hard time getting anything good to eat since his wife has decided to only cook gourmet foods. That and her constant harping cause him to snap, and he whacks her. Somewhere in the confusion he comes up with a new use for the microwave oven and begins to eat much better. Soon he's experimenting with different recipes. And different meats.

With so many movies getting the tagline worst movie ever made this film lands on so many of those lists. And like most of the movie's I ask is it really the worst movie ever made? Wayne Berwick may not have made an Oscar winner with Microwave Massacre but what he did make is a black comedy worthy of a watch. Crazy fact about the director he went on to write for Father Dowling Mysteries and Diganous Murder and even started Acting in 1959's The Monster of Piedras Blancas and here he is making his directorial debut 24 years later. The film is clean and looks great with clever camera angles and tricks that lead you to see an above average B film.

The writing is sharp and witty leaving you laughing at the right times and wondering what is next throughout the movie. The pace is really good not giving you much of a chance to get bored with Microwave Massacre. One of the best lines comes from a bar scene when the bartender is sick of hearing everybody's life troubles. When our main character is done whining about his day the bartender out of now where turns to him and says's "Didn't I ever tell you about my hemorrhoids? They get really bad when it's humid, you know" and then the comedic genius of Jackie Veron takes over just with facial expressions.

Let's talk about our "Star" Jackie Veron shall we this guy is great! So funny and sad to say when he talked I could not place that voice! It drove me crazy so I had to cheat and look him up on IMBD and if you have not recognized the name Jackie is none other than "Frosty the Snowman" in the flesh. Yep, that's right the sweet gentle voice of Frosty and that is why I think my subconscious loved him so much. Sadly this will also be Jackie's last film as he died of a heart attack in 1987. I know he was big on the stand-up comedy circuit but he sure should have done more movies as well as a few better movies. Also worth noting Rodney Dangerfield was the first choice to play the lead I'm personly thankful he turned it down.

Also worth noting his the wife played by Claire Ginsberg she rocked it in this movie but crazy enough this is all she did. IF she would have only given him a baloney sandwich he would not have cut her up leading him to be a cannibal, all for the love of that new Microwave! So many moments in Microwave Massacre lends itself to many jokes like serving up a gourmet meal by candlelight and paper plates! I wanted a movie full of 80's cheese and I got one! B-Movie fans should not pass on this one it is a fun ride with plenty of boob's, microwaved feet, bad jokes, and gore. All through the gore is kind of light-hearted and not gory at all you still need to put this on your watch list. I had a great time watching and you just might too.

After watching so big budget comedies that did not sit well with me I said I needed to good B movie so glad I settled on this one.
Posted by Bob Johns on January 11, 2018
3 Bloody Brains Horror Movie Review Watched in 2018