You only get one chance to save the galaxy twice. 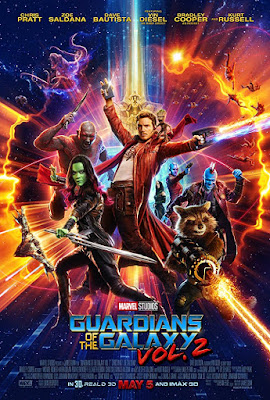 After saving Xander from Ronan's wrath, the Guardians are now recognized as heroes. Now the team must help their leader Star-Lord (Chris Pratt) uncover the truth behind his true heritage. Along the way, old foes turn to allies and betrayal is blooming. And the Guardians find that they are up against a devastating new menace who is out to rule the galaxy.

Ok, I said I was going find the time and watch more movies this year so why not get started as my vacation run's down. Little did I realize on this bitter below zero January night that I was picking a movie on my backlog that was two hours and sixteen minutes, good gravy! This was another one of those films that the trailer did not sell me on so I skipped it at the multiplex even tho I enjoyed the first one. And like the first James Gunn gives us a visually stunning sci-fi joy ride. 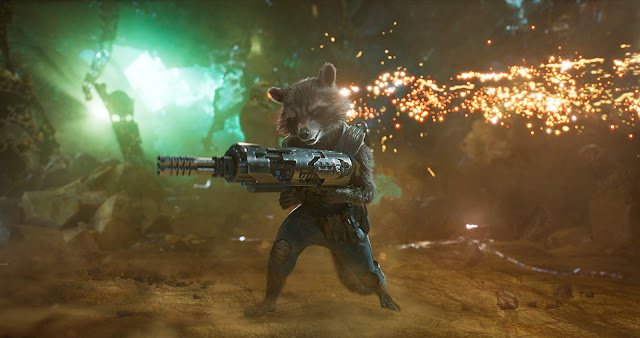 The opening sequence helps set the tone as we reunite ourself's with the band of misfits but for me, the first battle falls a little short but quickly I will settle in and just let my mind go and fall in love with the ragtag group all over again. The look and feel of this universe is rather breathtaking and puts you comfortably in the driver's seat for the space battle that is.  but the soundtrack this time around was eh. The silly Groot dance that took over two years to finish was cute and yeah it sets up the movie letting you know this is not the X-Men or the seriousness of Iron Man but more of a silly ride, and that is ok with me. 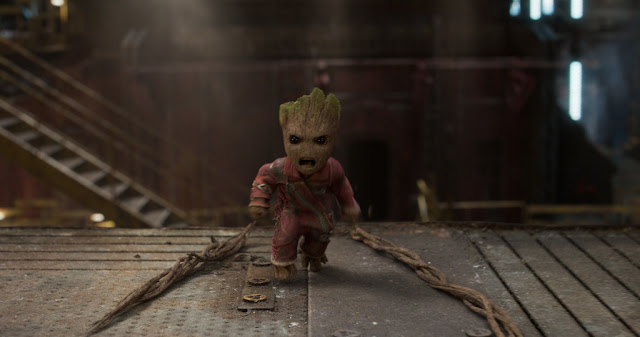 I get why everyone loves these guy's the chemistry is top notice even without a backstory. We also get a ton more action than that of the first.  But like all the other Marvel movies that try so hard to attach them selfs with other superhero's and how they are apart of the same universe, I still say "Who Cares!" like, In the Guardians of the Galaxy comics, Taserface is a warrior from the cybernetically enhanced race known as The Stark. The Stark is a race that found Iron Man technology that accidentally crashed on their homeworld, and as a result, worship Tony Stark, aka Iron Man as their god. and the silly scene with Stan Lee and the watchers I just don't care about tieing them all together just let me enjoy what is going on and not worry about the movie coming out in ten years that is going to tie it all together.

Ok sorry and with that little rant over let us get back to how enjoyable this movie was. Not as good as the first one but still well worth my time and yours. The lands that Gunn bring us to fit well the comedy is goofing as all get out and nothing takes itself to serious and for that, I love the Guardians of the Galaxy. This was a fun ride from Stallone to Hasselhoff and even Kurt Russel the story moves along well and it does move you as well. The plot had a heart not sure if that was what they went for but it worked out nicely. Man, even I started to fall in love with green Martians. The funeral scene was powerful and stunning all at the same time warping itself into a cute little package topped with a pretty bow.

The only true negative I have is the soundtrack as it was nowhere near as fun as volume one. From Cheap Tricks Surrender to Cat Stevens Father and Son I feel the soundtrack was pushed on us rather than being a fun charter on its own. And Baby Groot? What was the point other than to sell this to the young kids that us fathers where going to bring to the movie just so we could see it? I don't know just felt ok with me and other times in the flick he was great, oh boy I got on the soapbox again, sorry. 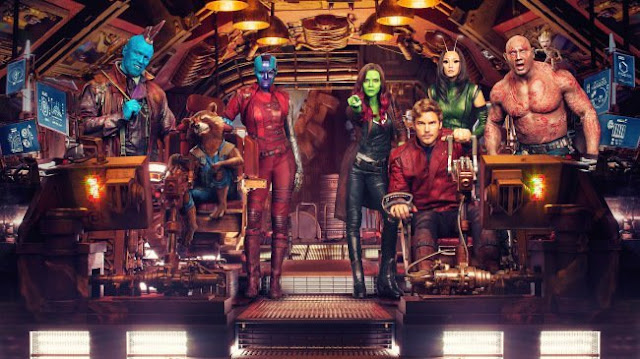 Ok look the movie was fun the cast is amazing together and visually this was better than The Avengers and Iron Man so with that Guardians is worth you two hours as it is a fun joy ride that has me wanting more. Ok started off the new year with a bang, now what?