Where will you be, when it all ends? 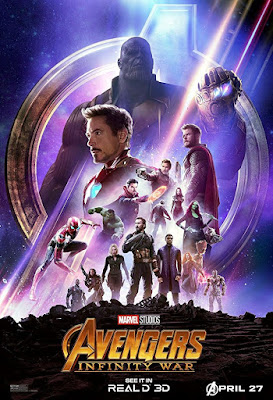 Synapsis: As the Avengers and their allies have continued to protect the world from threats too large for any one hero to handle, a new danger has emerged from the cosmic shadows: Thanos. A despot of intergalactic infamy, his goal is to collect all six Infinity Stones, artifacts of unimaginable power, and use them to inflict his twisted will on all of reality. Everything the Avengers have fought for has led up to this moment - the fate of Earth and existence itself has never been more uncertain.

With all the hype and buzz on social media like "Heart Stopping" to "I almost forgot to breathe" I was one of those fanboys that could not wait to see Infinity War. I made sure to skip on all spoilers (and hope to not post any here) and the night before I did some homework by watching Spiderman: Homecoming just to be up to speed. Was I ready to witness a billion dollar cinema onslaught of superhero goodness dam right I was!

The Russo brothers, where a couple of guys know best for Arrested Development and Community are taking the wheel of this jargonaut made me wonder could they handle it? Well, they did nice work with Captin America: Winter Soldier but fell just a tad short on Civil War and in a few ways, they did tie the movies together well but... well... I have to go with NO.

With a confusing plot that is all over the place in Infinity War, it takes you down a rabbit hole that when you come out on the other side your left wondering what the hell did I just see! Sometimes having too much going on can really take you out of the story.

The movie looks great CGI has come a very long way at times you just could not tell reality vs virtual reality and that was a nice change. All the charters look better than before all though aging rapidly (let's face it Tony Stark is not aging well and Bruce Banner well man they better wrap up these movies fast before Medicare kicks in for most of the staff.) But here comes the first really big issue for me, I hate when things take you out of the movie! Yes, I go to a movie to immerse myself into another world or place for a few hours. All I ask is to be entertained in the end to forget about life for awhile. Unfortunately a few times in this movie I felt I was watching a crossover of Star Wars, Lord of the Rings and even some Harry Potter mash-up and spit out this really killed the mood on so many levels. Boy did it get on my nerves.

Now before I go off on this flick lets talk Thanos for just a moment shall we? Was I suppose to love him or hate him? He comes off so bad ass and wimpy at the same time! Suck it up you meathead you want to kill off 1/2 the population of the universe but you want to mope around? Grrrr! Maybe I'm wrong but when I was a kid reading about Thanos he wanted to wipe out everybody and if you worked for him and failed he quickly did away with you. He was such a bad ass in the comic in the movie I just wanted to give the poor guy a hug.  I will say this he looks incredibly cool like a James Hetfield of Metalica on steroids cool!

As for the action-packed movie that so many people talked about I have a question for you, did we see the same movie? The pace was so far off and up and down for me. The Russo brothers would give you a bit of action then long winded filler story followed by some action and well you get my point its a Star Wars movie pace in a Super Hero world. Not all is lost really its still a good movie but is it worth all the hype? Wait I got it! These movies are gaining popularity after 19 movies and 10 years those 8-year-old's that watched Iron Man is now 18 and cannot wait for these flicks and those that where say 18 are now 28 and bringing there kids its the only way I can explain why this movie has made so much money.

If you are not a comic book fan but need to see this year's big blockbuster do some homework first. Do not make the mistake of skipping the last Thor and Black Panther movies otherwise you might be confused like I was and maybe that is why I found myself not into Infinity War. In the end, my mind is torn I want to love this movie  I did enjoy myself so I will give the Thanos...


So honestly what did you think? Comment below don't be shy to let me know how wrong I am.