We've eaten them for years, now it's their turn! 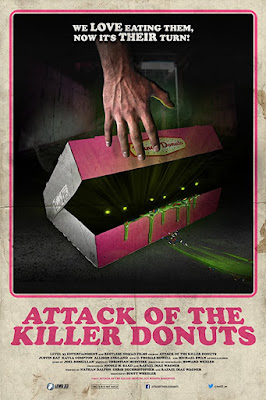 Synopsis: A chemical accident in a sleepy town turns ordinary donuts into bloodthirsty monsters. Unaware of the donuts' danger, Johnny, Michelle, and Howard sell them to unsuspecting customers. When the donuts start eating their victims, the only way the three friends can save their sleepy town is to track down the Killer Donuts down and destroy them. The final standoff is where it all began: Dandy Donuts.

How can you go wrong with a low budget cheese fest about Killer Donuts!? Now, this is what I call a fun and entertaining horror movie that does not rip off a movie with a similar tile. We get some computer animated donuts sure but the best part we get practical effect's donuts as well. Bless you, Scott Wheeler for doing horror right. Wheeler may not be a household name but he has worked on many Asylum films as well as X-Files and Buffy the Vampire Slayer television shows.

Even with a young cast of Justin Ray (Club Dread), Kayla Compton (Entourage) and Michael Swan they hold this movie together and play well off of one another. Their comedy is so dry with many laugh out loud moments make Donuts a killer treat. Director Scott Wheeler is a veteran special-effects artist, who handles the creature animation well. The doughnuts bounce around adorably and even carry a touch of grotesque menace as they leap at customers' throats, spewing a sickly green jelly.

The story makes for fair part buddy-comedy and part outbreak pic. It’s a strange blend of things, but it has a few tense moments and the jokes never disappear for long. Those comical moments only last for a moment or so. Soon  Wheeler pulls out all the stops sucks us in but does not seem to know how to finish his masterpiece. The first hour is per golden long john that teeters on boring same old same old in the last reel.

Surprisingly the best part comes from actor Thomas C Howell playing one of the two (Greedy for free donuts) cops Rodgers and Hammerstein, yes named after music composers Richard Rodgers and Oscar Hammerstein II. Howell is so damned good he renewed my man crush on his fine looking career. Who new Howell had comedy chops?

So look if your buddies are over and you're looking for a throwback to the VHS style low budget glory days of movies then crack open some of those Keystone lights and enjoy one hell of a fun ride into a world filled with Killer Donuts! I absolutely adore this movie and would watch it again in a heartbeat.

Just check out the trailer you will feel so much better.