Bud, Lou, And a Goolie too, tonight on Svengoolie 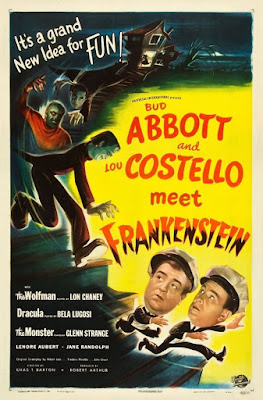 Stars:
Bud Abbott
Lou Costello
Lon Chaney Jr.
Synopsis:
The world of freight handlers Wilbur Grey and Chick Young is turned upside down when the remains of Frankenstein's monster and Dracula arrive from Europe to be used in a house of horrors. Dracula awakens and escapes with the weakened monster, who he plans to re-energize with a new brain. Larry Talbot (the Wolfman) arrives from London in an attempt to thwart Dracula. Dracula's reluctant aide is the beautiful Dr. Sandra Mornay. Her reluctance is dispatched by Dracula's bite. Dracula and Sandra abduct Wilbur for his brain and recharge the monster in preparation for the operation. Chick and Talbot attempt to find and free Wilbur, but when the full moon rises all hell breaks loose with the Wolfman, Dracula, and Frankenstein all running rampant.

(Source Svengoolie)
This classic Universal picture revived not only the careers of Bud and Lou but also the studio's near-dormant monster roster. The film’s success resulted in a few more films with the boys meeting other Universal horrors. Watch along with us, as we give you some background on the production, introduce key cast members- and add in some Sven fun!

"Abbott and Costello Meet Frankenstein" runs tonight on MeTV at 8 pm eastern/pacific, 7 central- and, if you're unsure of the channel or time of the broadcast where you are, please consult your local listings or www.metv.com . Remember to join the many Tweeters who live-Tweet during the show ( no matter what time zone you view us in) on Twitter- using the hashtag #svengoolie. In Chicago, viewers get a second helping of the stop-motion Ray Harryhausen magic that is the "Beast from 20,000 Fathoms" at 11 am on our main local channel, CW26.

Just a wee bit more Halloween for everyone.

So far I have two of the three Halloween Videos done for your enjoyment. The first one was Trunk or Treat COVID Style. Our local radio station hosted this event. It was fun and we are glad to have gotten into the long line early. Our second video is a small mix of things we did throughout the month of October. The good news Trick or Treat will be done soon so one more video of Halloween goodness coming your way soon. 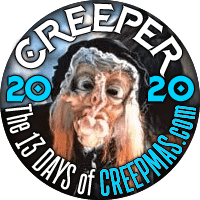 CALLING ALL CREEPSERS FOR CREEPMAS 2020!

Ok, here we go December 31,2019 the end of a very long very busy year. For me, it was somewhat a let down only watching 47 movies falling way short of my bottom line of 52 for a year. But working side by side with my girls on all these musicals made it worth the while. So going into 2020 my goal is going to be a tad lower shooting for 60 movies next year (my goal has been 75 for a few years now). In the meantime here are the ten movies I deem the best of  2019. Number 10 This seems to be my most popular post for the year as well. I really loved the emotion of this movie and how it made me feel. Number 9 Yes, Toy Story 4 was a bit of the same as the past few stories and yet still one of my favorites of the year. Number 8 Yes, Ralph was better than Woody there I said it. Number 7 This was defiantly a fun year for music inspired movies. I could watch the Dirt again tonight! Number 6 Shudder has been one of the best investments of the year for me. It was 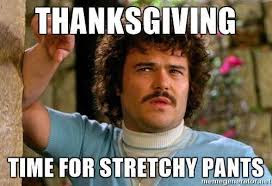 Oh, Thanksgiving during Covid what a time to be alive! What do I mean? Well, it's not crazy talk just think about it, even with a smaller bird on the table for me I went from 20 family members eating my food to just 2!! That's a lot of turkey for this guy! Not to mention all the pie just for me!! I will take it or three pieces I will let you know. And Aunt Edena will not be around so no stove top stuffing just the good stuff!! Also no need to dress up this year it's going to be baggy jeans or sweat pants for sure. Heck, my wife will probably keep on her pajamas all day long. So let's all just relax enjoy the family around you Zoom if you can (or want to) and for god sakes do not run out on Black Friday for the junk you do not need. Retailers will be desperate for your money all year so the sales will go deeper on better products.  Oh and yeah set those scales back nobody needs to know.  Most of all have a safe, warm, and Happy Thanksgiving.

This will be NOT SAFE FOR WORK Music Monday! I love Little Big and this song say's it all. Not for you? That's ok check out the Taco song by the band you'll love that one. I meant to post this for Halloween and I still feel the need to share it so here you go! It's ok to Jam out to this one. I love Billie that is all. Same sound what's not to like? You need some cuteness to brighten your day.

There is much more to offer on Thanking than just Adam Sadler's Turkey song. And I promise to skip Baby Shark's Thanksgiving as well.