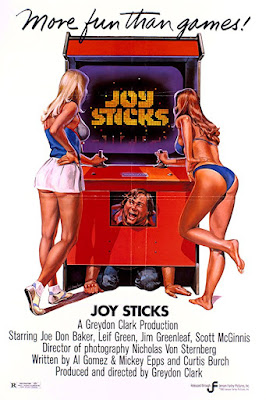 When a top local businessman and his two bumbling nephews try to shut down the town's only video arcade, arcade employees and patrons fight back.

Oh, man, Greydon Clark has given us a few great cult classics like Black Shampoo, Satin's Cheerleaders, and teaming up with Joe Don Baker right after this movie in Final Justice tried to capture the 80's arcade scene but run's out of quarters rather quickly. Moves like this are meant to be senseless fun with gorgeous girls half naked running around jock's being jocks and nerds taking over and with that this film delivers. But...

... the actor's, story and idea fall short fast making a timepiece like this a waste of time. And poor Joe Don Baker takes the lead idiot role that really dumb's down his portfolio. For me, the big selling point is actress Corinne Bohrer who I had a crush on after watching They Call Me Bruce and of course Police Acadamy 4 along with Stewardess School was going to be the main reason I pressed play. Oh man wait a minute she is talking like a Valley Girl like no way! Ugh, I'm so disposed. But she still looks good.

As you sit and watch a movie about the Arcade boom you want to be transferred into that time and space. To do that your location has to be as strong as your story Joystick does not look like an arcade at all more of a cramped warehouse full of illegal things. Soundtrack wise it does not help move you along at all with just hard to hear pop-rock if that. The story is the only bright spot in this whole thing in fact if the movie was PG and they dropped the boob's out of the script it might have worked better, but what do I know sex sells and in the 80's we seem to have a lot of it.

I feel bad I really wanted to like Joystick, but with hopes of capturing, a movement that I was apart of this movie falls flat and becomes rather lame! It's not very often I say pass on a flick but today is that day. Do not pick up your joystick do not press play move along nothing to see here, well except boobs of course.