Welcome to a magical kingdom. 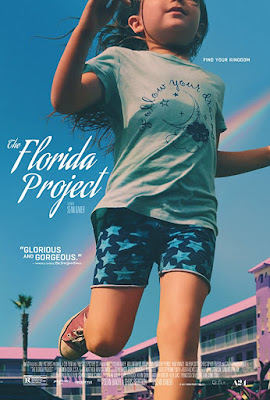 
Set over one summer, the film follows precocious six-year-old Moonee as she courts mischief and adventure with her ragtag playmates and bonds with her rebellious but caring mother, all while living in the shadows of Walt Disney World.

I have never seen a more beautiful movie through all its tragedy and mess of raw emotion comes from its heartwarming cast and director. Sean Baker is a master of his craft, coming off of Tangerine that was shot on an iPhone 5. Baker is a director who primarily works with first-timers, and for example, he found his cast on Instagram (Bria Vinaite) and walking through a Target (Valeria Cotto). And yet his magic touch turns his dirty world into glitter and gold.

Bria Vinaite gives a commanding debut performance as a walking rebuke to so many ugly cultural stereotypes about being a “bad mom” she may be a hellion, and not meet the standards of what a parent is supposed to offer to their children, but it’s a performance that exudes utter pride and affection at every moment, even if those emotions sometimes curdle into arrogance and irresponsibility. And yet I find myself looking at her at times thinking she is doing her best as a parent exactly what Baker sets out to do.

Baker would have you feeling that there are just parents who look out for their kids, and those who don’t. But the true first-time revelation is found in Brooklyn Prince, who carries much of the film’s on her shoulders and does so without the affectations of so many child performers. One moment late in the film, when the realities of her life finally descend on her we see Prince, as she works through the full spectrum of adult emotions for the first time within seconds. It’s such a breathtaking piece of performance for any actor, let alone a young actor who was discovered doing small commercials in Orlando.

William Dafoe, who does remarkable work as a kind, everyday man attempting to do right by those in his charge while also keeping himself afloat. Dafoe's character is so touching and warm he becomes another set piece that makes the magic work. You really feel for him at times and you see the warmth and empathy he has for these families. Dafoe spent a week living in the motel before production in order to immerse himself in the life of the characters & master the nuances of the regional dialect. All this paid off for him as he was nominated for Best Performance by an Actor in a Supporting Role.

I do not say this very often but The Florida Project is one of those movies I ask you to seek out you would be foolish to pass on this one. Even if you are not a fan of Independent Cinema this movie will tug at you in ways that most big budget movies cannot do! There is an underbelly out there just under the Happiest place on earth that you need to witness from the comfort of your own home. IF you do not fall in love with Moonie (Prince) then you are missing the point, she drives this movie into your heart and leaves you thinking about her for days after you witness her story.

The Florida Project is the pot of gold at the end of a rainbow. It's a crazy world we live in and Sean Baker gives us a slice of American Pie that we never knew about. Not many movies move me like this did, in fact, it almost brought me to tears and I loved every moment of it and I promise you will too.


As of this date, The Florida Project is free to Amazon Prime Members.