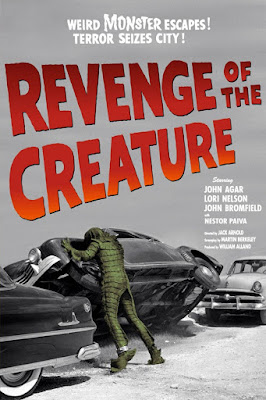 Synopsis:
Determined men travel back up the Amazon to capture the creature from the famed Black Lagoon. Once found and stunned by dynamite, the fish-man is transported to Marineland (in Florida) for revival, exhibition, and study. Strongly objecting to captivity and jabs from an underwater electric cattle prod, he escapes, only to track down and abduct beautiful lady scientist Helen Dobson, which sets authorities (lead by Prof. Clete Ferguson) to dog his heels.

Watch 'Revenge of the Creature' at 8PM | 7C, Saturday, September 22, on MeTV. And for us country bumkins we can catch up with Terror Out Of The Sky on the WCIU at 11am.
Posted by Bob Johns on September 22, 2018
Svengoolie