A Pop-Cultural Staple 9 to 5 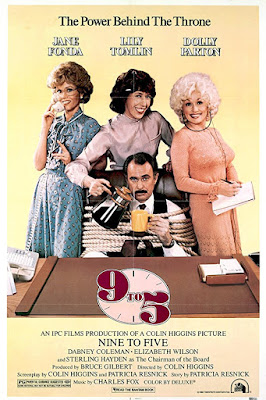 Synopsis:
Meet Franklin Hart (Dabney Coleman). The biggest "sexist, egotistical, lying, hypocritical bigot" boss on the planet. He thrills in taking advantage of his head female office staff; humiliating, downplaying, and condescending against them whenever conveniently possible, particularly his top assistant Violet (Tomlin). Long-exhausted over his gruesome bullishness, Violet, alongside co-workers Doralee (Parton) and Judy (Fonda) comprise comical methods of "doing him in" when a freak incident occurs. They then manage to kidnap Hart and trap him in his own house, while assuming control of his department, and productivity leaps. But just how long can they keep him tied up?

How many of you grew up on HBO being that small little box that sat next to your tv? If so I'm willing to bet you watched Nine to Five or maybe even The Incredible Shrinking Women hundreds of times. What a great time to grow up and not to mention the movies of the eighties were always fun to watch. So the main question for me when choosing this movie for the Fonda Blogathon, does it hold up after all these years. 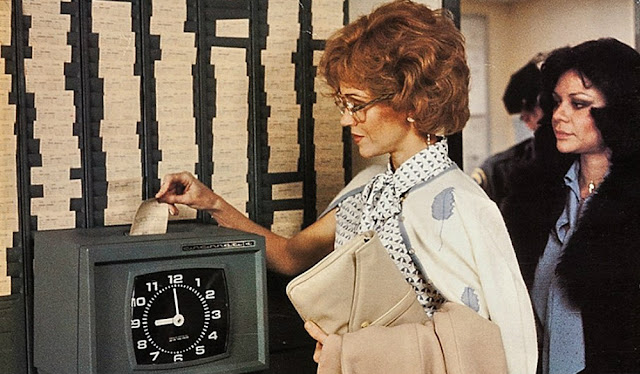 The answer is simple Hell Yeah! Even with today's #metoo movement, 9 to 5 is still a simple pleasure to watch almost 40 years later. Fonda plays Judy Bernly, a middle-aged divorcée entering the workforce for the first time in years.  Judy's first-day outfit was inspired from a conservative wardrobe with over-sized glasses, an elaborate hat, and an over-done hairstyle.  Fonda interviewed numerous women who had entered the workforce late in life due to divorce or being widowhood just to come up with her fashion in this movie. 9 to 5 was also the first female-dominated film to gross $100 million dollars and it's popularity lead itself to a spin-off tv series. 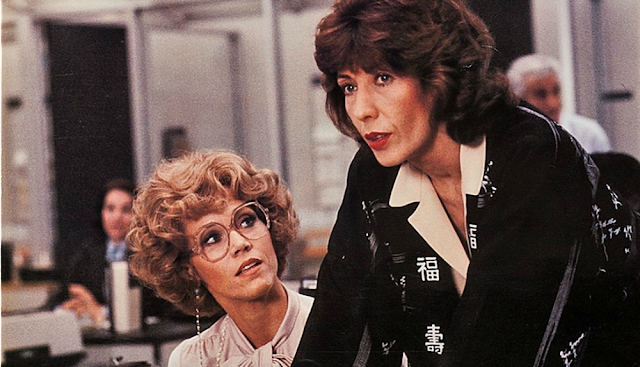 Considering the recent sexual misconduct that has swept through Hollywood, a retooling of 9 to 5 seems like the perfect project for the modern era. As a refresher, the original film ends with (decades-old spoiler ahead!) Tomlin’s character getting a major promotion, Fonda’s character getting married, and Parton’s character zipping off to country stardom. Fonda announced that the trio will indeed reunite for a sequel. Both Fonda and Tomlin will executive produce the film, and will collaborate with its writers as well. The film will swing ahead to the present day, though it will still be set at the "Consolidated Companies" workplace. The plot will focus on oft-discussed issues like the wage gap and harassment in the workplace they hope to have it on the big screen later this year. 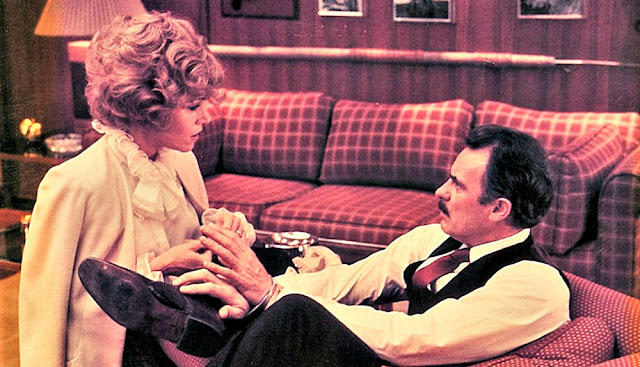 .
In the end, this Pop Cultural staple is well worth a revisit! The humor still stands true today but sadly the workplace has not changed much!

This short look back on 9 to 5 is part of The Fondaton Blogathons hosted by Sat In Your Lap so make sure to head over to the site by clicking here for a full list of posts.

As for Nine to Five, you still stand true with a score of,